Thinking of Getting a Bidet? Here’s What to Know First!

2020 was a rather wild year, and that’s putting it lightly. One of the weirder aspects of that entire time frame was the shortage of toilet paper in stores. For some reason, everyone suddenly needed to stock up on toilet paper like they would be deprived for time immemorial.

Other people either not willing to join the fray or simply finding less stressful alternatives have started to consider the bidet. In some cases, they look into bidet seats; for others, it’s the attachment that will go on their existing toilets.

Are you one of them? Here, we’re going to cover what you need to know to make an informed decision about getting one.

The Bidet: What Is It?

Bidets are essentially a fixture that come in a few styles, like a hose with a spray nozzle end. It’s made primarily with the goal of cleaning a person’s bottom after they use the toilet. The idea is to have a more environmentally-friendly and hygienic alternative to the classic roll of toilet paper.

Not using toilet paper rolls anymore also makes things easier on the plumbing, since there’s less likelihood of toilet paper getting it clogged.

Bidets are common in Europe, Asia, and South America. Common bidet types include:

How Is It Used?

It’s important to make a plan for using a bidet before any attempts. Flushing the built-in bidet or turning the spray nozzle on can give an idea of the water pressure and where the water is streaming from.

Take note that soap isn’t necessary. It’s important to turn the T-valve off after each use, however. This is best for leaky attachments to be avoided.

Women should take the extra step of directing the water front-to-back. This helps avoid bacteria in the vulva.

Read on to learn more about the bidet’s benefits:

The bidet is an incredibly helpful bathroom fixture. It’s essentially a way to use water instead of toilet rolls for cleaning certain body parts while on the toilet. Getting one is a great idea because it’s very helpful and cuts down on toilet paper considerably. Other benefits include being good for hygiene and addressing genital health as well as hemorrhoids.

Are you in need of a plumber in Canoga Park? Drop Candu Plumbing & Rooter a line today! We’ve got professional, top-notch plumbing services for our clients.

PrevPrevious4 Common Causes of Running Out of Hot Water
NextWhat Should I Do If My Water Heater Keeps Leaking?Next 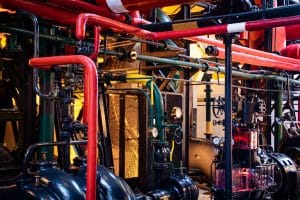 Here is How You Handle a Sewer Backup in Your Basement

Three Types of Plumbing Insurance to Manage Your Business Risks

What Is a Sump Pump and How Does It Work?